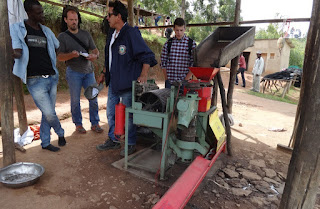 Rusitira has a small eco-pulper donated as part of a Technoserve project. Mario says this type of depulper is a realistic solution for a small “start-up” washing station because it uses much less water. The quality is obviously highly variable, though. There’s no real fermentation process.

Evidence of waste – possibly:
I found wet parchment in tanks with lots of beans still having cherry skin on them, too. There was no good explanation for why this parchment was sitting damp in a tank, as if it had been there all morning and maybe all night. There was also pulp left on the ground at the end of the waste stream “chute” from the depulper. They had a manual depulper on-site for farmers to use to process ordinary, and it had cherry pulp waste surrounding it on the ground also. The drying tables were crudely built. The coop had built “everything themselves” so that may explain the condition, but the whole station had a kind of run down atmosphere about it.


Farmer 1 – female picker
Value Chain insight from her were clues about the kinds of rules used to manage quality with pickers. If you break a branch, you get sent home for the day. You can come back the next day and try again. Pay is 700 Rwf per day (about $1). Stability of income is highly prized. The farmer emphasized that she appreciated being able to come back to work for this plantation owner year after year.

Farmer 2 – male farmer
This man seemed elderly and had severe eye problems, but he was very proud of his 600 trees and he was obviously still actively farming daily. Even more impressive was how proud he was of the rejuvenation he was doing on his trees. It seemed like he had stumped them (at least a portion of them) a few years ago and now he is about to stump another set. While he did not say this exactly, his enthusiasm for coffee comes at least partially from his understanding that he was able to earn more money in the long run, by pruning his trees. So he’s continuing with dedication to this cultivation method. However, he didn’t know his annual production in kg. One of the dangers of this farmer's uncertainty about his production is that it’s unfortunately possible that others steal from such farmers.

Farmer 2 showed us where and how he makes ordinary coffee. He has a special stone that is the shape of a small Frisbee. He crushes the cherry by placing it on the floor of the patio.