28. Field Notes 5: BUF Coffee and a nearby collection site

I’ve heard about BUF Coffee from numerous roasters’ blogs and from the pages of PEARL and SPREAD history. It seemed like a sign to me when I met Sam Nwitwe, the son of BUF’s owner Epiphane Mukashyaka, at SCAA Seattle in April. “Please visit,” he said. So I gave him a call.

Augustin, Grace and I took a Volcano bus from Huye to Kizi, where we switched to motos. The moto ride through the mountains on rutted dirt roads took about 30 minutes. Some of this way was so steep I was surprised the moto driver was able to keep the bike balanced.

Value Chain Insights
At the washing station there were 14 farmers assembled to talk to us. I only asked four basic questions: # of years as a farmer, # of trees and # of people from each person first. For the discussion question, “do you see a future in coffee?” there was one pessimistic and several optimistic answers.

In the village we found one of the farmers again – the one who is also a site collector. I interviewed the young woman farmer who was at the site to deliver cherry. She was getting 200 Rwf and didn’t seem to know there was an option to deliver cherry for 210 Rwf by taking it up the hill to the CWS. She, like all the other farmers there, spent at least 20 – 30 minutes sorting cherry on the patio of the site collector’s building. She said there was never a better price for more quality cherry. She said all cherry had to be mature – no exceptions. 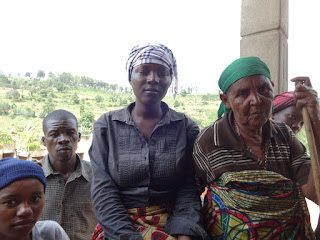 We talked to the site collector also, since he is also a farmer with many trees. Seemed like he was doing very well. Sells ordinary, too. He had a large bag of ordinary in the shop. He rents a hand depulper for making ordinary. He said a company goes around the country side renting these small machines to farmers. 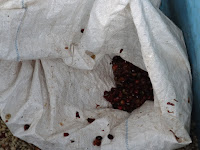 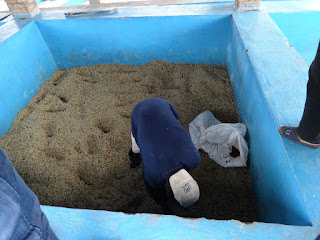 At the washing station two things made me pause: the time farmers were spending sitting on the ground sorting cherry and manual removal of cherry from parchment after the coffee has come through a depulper. This scenario was especially strange because there was a person standing ankle-deep in wet parchment, in a tank, picking out the ones where the skins had failed to be removed by the depulper. The quality manager explained that they need to get them out because if they stay on during fermentation, it will taint the taste of the entire batch. I believe him. And I don't think BUF is unusual. The "result" after depulping at most washing stations is "red-spotted". But it still seems odd. Why can't the depulper more thoroughly remove all the pulp?

Another thing that made me not only pause, but made my mouth water, was the beautiful quality of cherry that farmers were delivering while we were there (see photos below). 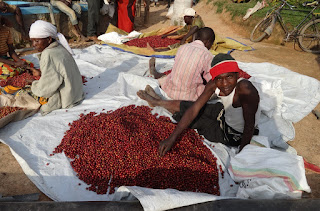 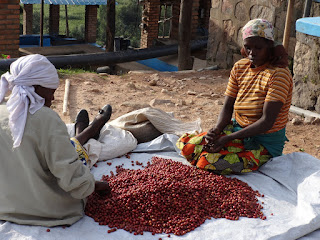