Everything well marketed for this 8500 tree plantation. David worked for SPREAD back in the day. Now he’s creating and growing David & Family Co.
·         Aloys was a skilled and knowledgeable tour guide. I felt like I could have been at Disney World or Epcot Center in Orlando, FL, because of Aloys' friendly smile, attention to customer service and the visual aids and detailed tour pre-planning that was obvious throughout the day.
·         The excellent reception area had an overview of value chain steps in Rwanda and a satellite map to show visitors where they will go on the tour. 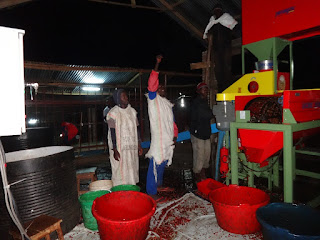 Night delivery observation:
I met Aloys at the reception desk at 8pm, so we were at the washing station at 8:30pm. They were just finishing up a batch of cherry that had been delivered around 5 or7pm from collectors. They were anticipating more deliveries from collectors who come from further away. They arrived as planned and I was able to see the whole process of arrival and delivery.

Most important insights were in this coffee delivery area. Lots of standing around. Aloys explained it would be different if it was peak season and they were receiving lots of cherry. But I’m not 100% convinced. He said the staff is paid the same whether they work two hours or 8 hours. So it would seem to me that workers could be motivated to finish quickly and go home, especially on a Saturday night.

The surprising area of waste was the way they were diverting the triage as it came out of the “middle” of the de-pulping, de-mucilaging process. From what I could tell, many of the small and damaged beans would not get depulped on the first run through the depulp machine. So they are “caught” by the turning “drum” screen – depulped cherry goes through, and the ones that are still red get kicked out. The kicked-out red beans are caught in buckets – 9 buckets and barrels the night I was there, which accumulate around the machine. Once the first pass is done, a chain-gang of 3 workers passes the buckets of red cherry up to the guy at the top of the machine who dumps them into the depulper for a second pass. Batch processing and seems duplicative. Can’t be efficient. But apparently this is also not unusual. This is a modern Penagos machine and I have seen video of other washing stations that create a "second pass-thru" using manual labor very similarly.

Waste water:
Another surprise for me was the amount of waste water the washing process produces. I give credit to Aloys because he showed me the entire waste water system without me even asking. I think he is proud that David & Family have invested in a fairly sophisticated system, as he should be. But as we looked at the 100 meters of underground pipes that channel waste water from the station, and then lead to 11, (counted ‘em, 11!) ground tanks, each 7 m deep and 1 m square at the top, I couldn’t help but think there’s got to be a way to use less water. The depulping machine they have is one of the latest models from Penagos, though, so it’s not like they’re using outdated equipment. I don’t think the one they have is the “Eco” pulper, though. Mario says typical coffee depulping and fermenting uses 70 L of water per kg green coffee. He’s seen systems that get that number down to 7 L.

Value chain learning:
The signs co-promoting David & Family and his 5 key customers bring up the question for me of whether this model is very unique in Rwanda. How many customers do most washing stations have? Is there an ideal number and type? My hunch is that having and building these few long-term customer relationships has enabled Huye Mountain (David & Family Co.) to have some stability that is otherwise hard to achieve in a volatile coffee market. This stability enables them to focus on marketing details that are hard to "get to" when you're fighting to get every container sold.

So now the question remains -- does even Disney World have room to get lean?