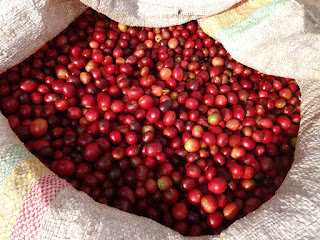 Our team of researchers refined and debated the wording of each question on our instrument that will guide the interviews of 2024 smallholder coffee farmers. The questions where we try to quantify the farmer's number of hours spent sorting cherry brought out interesting details from the researchers who have worked with coffee farmers a long time. There is a lot of variability out there. Some sort at home, some don't. And "sorting at home" might mean sorting in among the coffee trees, or it might mean carrying the cherry to the household compound and then sorting. Some sort at the washing station before they can get paid; other washing stations "buy everything" so the farmer does not spend time sorting at the washing station (but the washing station probably does).

Recently, Ben Carlson from Long Miles Coffee Project (LMCP) in Burundi implemented a very interesting "market test" related to sourcing quality cherry from Burundi's smallholder coffee producers. I love his story because as we work on quality issues in Rwanda and Burundi, a key point I am trying to show is that coffee washing stations do not clearly communicate their quality requirement. Communicating a quality requirement to suppliers is a key principle of "Lean at Origin."

1. LMCP was very strict last season (2015). We told coffee producers we needed 100% red ripe cherry. We showed them with Brix meters why. We conducted an open cupping at select hills and let them taste the difference in 'ripe' (high Brix reading) vs. 'not ripe' (low Brix reading).
2.  From the first day we opened the washing station, we strictly enforced the "only red" rule. What did this enforcement look like? We didn’t tell them they couldn’t deliver.  Rather we floated and sorted each farmer's cherries and wouldn’t purchase any that didn’t meet our standard.  Sometimes this meant sending home over half of a farmer's a daily harvest*.  Farmers were encouraged to come back, but only with red cherries.
*these would be hulled at home and sold as “semi washed” to a local buyer. 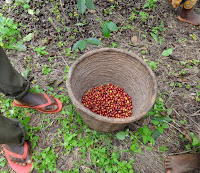 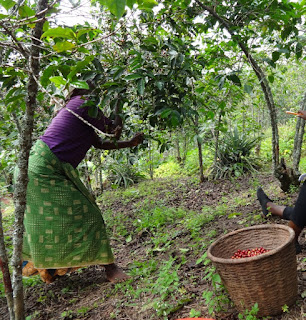 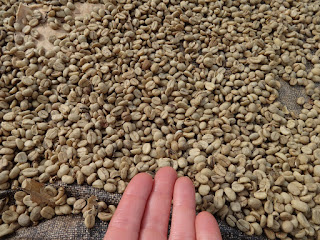 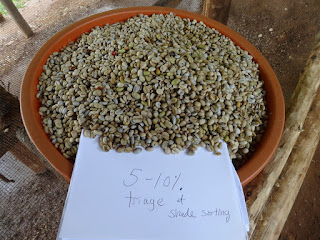 Interesting side note on Collection Points. 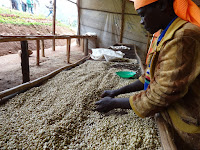 Our collection points are run by cooperatives.  The same strict measures were expected  in these locations but were not adhered to. We did not have a clear daily communication program at collection points like we had at the washing stations. Thus we received lower quality cherry, more triage and under-grades. The result was a noticeable cup quality decrease from collection points pre-triage and a huge difference in the volume of A2 and A3 parchment. Bottom line, profits on cherry from the collection points were lower.

Thus LMCP will be hiring more scouts and placing Coffee Scouts with Brix meters to train farmers at every collection point and oversee rejection of cherries there in 2016.  Another decrease in farmer delivery??? Perhaps. And with that feared decrease in numbers of farmers delivering, will certainly come the proven increase in prices to those farmers who achieve the requirement, and they will gain new producer families who are up to the challenge to deliver only quality cherry! 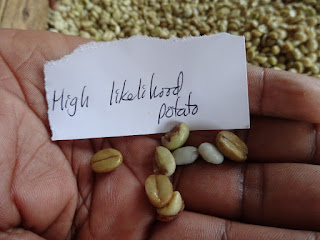 Posted by Ruth Ann Church at 2:34 PM No comments:

The exciting start-up of the project is happening.
Oh yes - my family and I also moved into our house in Kigali on Dec. 1. We're finally feeling like we're staying awhile, after a month of living out of suitcases. I'm grateful to be able to focus on monitoring and evaluation for this project again, instead of feeling like such a foreigner trying to register kids for school, buy a car, rent a house, find groceries, etc.