59. Lean at Origin Celebration at KOPAKAMA

Today KOPAKAMA and representatives of KOPAKAKI celebrated the completion of the Lean at Origin training "phase 1". This part of the training is called "Journey Start" because a Lean transformation is journey. A celebration is necessary after the completion of phase 1 because the first step is often the most difficult step. The decision to take a new path does not come easy to most management teams. KOPAKAMA and KOPAKAKI are both taking risks to spend the time and effort to learn Lean tools and concepts. There is no precedent in their world. No other washing stations have done this yet. They decided to embark on their "Lean Journey" having only heard the objectives and methods described.

So the event today was truly celebratory. Production manager, Gervais KAYITARE, was the master of protocol, introducing the order of events. He started it with a welcome from the President of the cooperative, Evariste TWAKIRE and an overview of the training by the washing station manager, Frederic HAKIZIMANA. A representative of the local government also welcomed the group of about 60 employees and their spouses and some children.

The attendees were divided up into four groups to tour the washing station by visiting 4 stations. At each station, a group of employees described the KAIZEN event they had planned and implemented. They shared the actions they took and the results, often pointing to new signage and new written metrics they are keeping in notebooks. The four KAIZEN groups, each with 3 - 4 employees, were:
1. Cherry reception - sensitizing the farmers and collectors about quality
2. Depulping area - improve safety.
3. Washing and grading - conserve water/use more efficiently
4. Pre-drying area - improve organization
[See photos at each station below.]

After the tour, everyone re-assembled in the storeroom-turned-auditorium, and the dancing began! This is the beautiful tradition in Rwanda, of having a professional dance/drum/singing group perform  to give thanks and share happiness at any good event. Their expressiveness through music, turning, twisting and stamping is amazing! 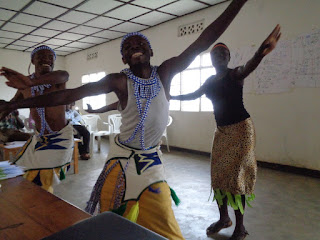 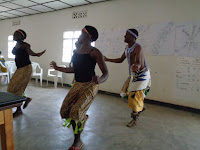 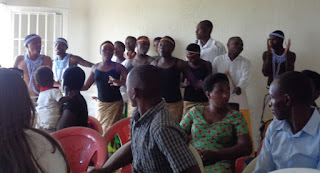 Besides celebrating the start of  something new, there was a second important reason for the Open House. It gave the employees a chance to be leaders and to "shine" in front of the people who mean the most to them -- their family, their co-workers and the leaders of the cooperative. It also put a spotlight on the work that they do, giving those jobs importance and meaning that may have been uncertain or at least questioned prior to the training.

There were bright smiles as the employees received their certificates. I read their names and Eric NSHYIMIMANA helped tremendously with translation and general organization. The local official (name?!) passed out the certificates and the president, Mr. TWAKIRE, and the manager, Mr. HAKIZIMANA were also in line to shake each individual's hand.

After the formal part of the festivities concluded, the participants all enjoyed a small lunch prepared by a local caterer. Then they played modern pop songs on the sound system and continued to celebrate with dance and conversation. There were a few beers consumed as well! 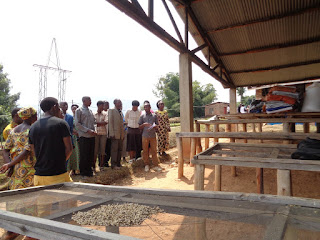 Andre and Betty shared the way the pre-drying KAIZEN team had formalized the organization of the equipment in that area and trained the pre-drying supervisors to implement it.
Posted by Ruth Ann Church at 7:23 AM No comments:

58. COSA Raises the Bar from Sustainability to Resilience


In an April 15, 2016 e-newsletter, the Committee on Sustainability Assessment (COSA, thecosa.org) announced the launch of a new project to focus on resiliency for agricultural value chains and projects such as coffee and cocoa.  This was great news to Artisan Coffee Imports, as we have been seeking to understand and support resiliency for the coffee value chain through this blog for about 1.5 years now. COSA is known globally for excellence, so having their commitment, along with funding from the Ford Foundation and SECO, to resiliency is a welcome and exciting development.

Up until now, COSA has pioneered the development of metrics and data on certifications as part of its core work. It conducts rigorous research in rural areas of coffee and cocoa producing countries[1] to help assess the impact of certifications that form the basis of sustainability programs implemented by some of the world’s largest roasters.

With the announcement in April, COSA is taking its good work in the sustainability area to new heights. We expect their credibility as an organization will give the “resiliency movement” an important boost in legitimacy. They will be working in close collaboration with partner institutions that are also interested in field-ready tools including Root Capital, The Sustainable Food Lab, Lutheran World Relief, and Catholic Relief Services. Gathering inputs from across its global network of leading institutions such as the FAO, CIAT, and IFAD will further ensure that this will be a well thought and widely accepted approach. COSA’s ability to generate well-designed metrics and conduct solid field research will also help the field.

COSA’s president, Daniele Giovannucci, discussed the initiative with us in an interview by phone on May 5. He says that the tools will be available free of charge as part of their commitment to the public good (COSA is a registered non-profit). The objective of COSA’s resiliency work is,

“to create a distilled set of practical indicators and approaches. Companies and projects need tools for managing resilience in a simple and practical way so COSA and its collaborating partners will devise ways to easily monitor resiliency. By bringing together teams of global experts to learn from each other, we can get to optimal approaches that look holistically at the issue and build on the considerable academic work already done.”

We asked Giovannucci, “what is the difference between sustainability and resilience?” He replied, “The distinction is a fine one. It depends on where you focus the lens. Resilience is the core – the survival of people and production systems. Sustainability implies higher level of social, environmental and economic progress. Resilience is the ability to be around to do that!”
At this point, Giovannucci introduced the COSA researcher coordinating their new effort, Dr. Elena Serfilippi. She offered COSA’s definition of resilience for the coffee world.
Resilience: The capacity of people, communities, or systems to prepare for and to react to stressors and shocks in ways that limit vulnerability.

Serfiliippi and other members of the COSA team including Gayatri Ramnath, Jessica Mullan, and Gabriela Soto will be spearheading COSA’s efforts. They will evaluate and synthesize the ideal resiliency indicators that will be both user-friendly and low-cost for industry stakeholders to use. With a number of partner institutions, they will be creating a Resilience Tool Kit. She points out the importance of resilience as part of Sustainable Development Goal (SDG) #1: End Poverty.
“By 2030, build the resilience of the poor and those in vulnerable situations and reduce their exposure and vulnerability to climate-related extreme events, and other economic, social and environmental shocks and disasters” (Target 1.5)

In the phone interview Serfilippi explained the phases of COSA’s resiliency project:
She explained what will make this effort distinctive. “The metrics will build on the perspectives of existing scientific literature, but will be very pragmatic rather than academic.  Through a careful participatory process the partners will achieve metrics that are SMART (Specific, Measurable, Actionable, Relevant, Timebound). Then simple guidelines for using them to identify the key resilience issues will be developed. Combined, these can help ensure stronger supply chains, producer communities, and more effective projects.”

COSA is not the first to tackle the job of developing proper metrics for a certain aspect of the coffee industry. In our industry there are recent or on-going efforts to create better metrics for measuring taste, monitoring gender-inclusiveness and avoiding slave labor. So a focus on resiliency metrics is certainly also due and will be welcomed by many actors in the value chain.

COSA understands three engagement levels farmers might have: Adaptive, Absorptive and Transformative. The core elements behind each of these terms are the concepts around which indicators will be built.

Currently, Serfilippi is finalizing the science review and partners are already joining. With a solid start on these first two steps, we are sure to hear more soon from COSA on resilience and a Tool Kit we can all apply in our own space in the coffee industry.

Posted by Ruth Ann Church at 5:12 AM No comments: