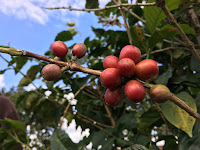 An undercurrent of discussions and meetings related to cost of production and farm investments has been on-going in the specialty industry for at least two years, maybe longer. It was 2015 when I first read Chad Trewick's elegant article about cost of production in Specialty Coffee magazine. By 2016 he had organized conference calls for the SCAA's Sustainability Council to learn about cost of production from a consultant, Christophe Montagnon, president of RD2 Vision. I felt fortunate to participate as a guest on one of those calls. Chad understood my curiosity as a grad student writing a masters thesis on this exact topic. Later in 2016 Montagnon's report was available, and just last month a revised and finalized version of the "Farm Profitability" report was introduced to the world by the SCA at the Avance conference in Guatemala. Now comments are reverberating such as the recent "Perspectives" blog post by Kraig Kraft, technical advisor for CRS, which was re-published in Daily Coffee News.

I would like to add to these comments. First, I'll share 3 key points to consider when reading the SCA/RD2 Vision report. Then I'll share 3 points as comments to Mr. Kraft's article review. For both sections, the following three equations are important to keep in mind:

o    We’re not saying “every farmer will be more profitable in a cooperative”, but in Rwanda, something is happening in cooperatives that helps farmers. Because of the data that shows this, we can do a better job of discovering why.
Kraig Kraft writes in "Perspectives on the New SCA Report on Farm Profitability."
The AGLC program produced a helpful typology for understanding the spectrum of small to large farmers. See figure below. This typology highlights an important aspect driving whether farms are profitable or not - farmer motivation.  The SCA's report doesn't mention it and neither does Mr. Kraft. Yet a farmer's motivation for growing coffee cannot be assumed to always be profit maximization. In Rwanda, at least, some farmers are growing coffee out of necessity - it is their only source of cash. The typology also highlights the other factor that greatly impacts profitability, that is capacity. Capacity includes things like whether the farmer has an education, other adults in the household, a large farm and access to credit.

The punchline of the typology is that large farmers in Rwanda own over half of Rwanda's trees. Seems like they are similar to MACERCAFE in Nicaragua. They have capacity and their motivation is commercial - profit maximization. So price is a key driver. If the price they receive for their cherry does not cover costs, with a margin that matches their opportunities elsewhere, you can train them and talk to them all day, but do not expect their coffee trees to be well-attended. Their focus will remain on the crops and businesses that are paying the highest return on their investment.

The fact is, it is helpful to be having these discussions so that the gaps in our knowledge are recognized, which allows researchers to focus and fill the gaps. There is a lot of new research since the time that the SCA's report was written in 2015, especially from the AGLC project. Click here for the project description and scroll down to see the list of publications and resources.
Posted by Ruth Ann Church at 10:52 PM 3 comments: