April 25, 2018
Coming out of the whirlwind of meetings and new information at the Specialty Coffee Association
Expo, April 19 - 22 at the Washington State Convention Center in Seattle, I was grateful I had planned a quiet lunch with a faculty friend, Dr. Susan Jackels. Jackels teaches chemistry at Seattle University. We first crossed paths at the International Coffee Symposium in Kigali, Rwanda back in March 2014. For those that may not know, that was the first public recognition by governments in the region that potato taste in coffee is a real issue. Despite the fact that researchers had identified the unpleasant, raw potato taste in coffee in the 1960s, officials allegedly had been encouraged to avoid giving the taste a specific name, traceable to specific countries.

The Cup of Excellence competitions in 2012 and 2013 are often given credit for bringing the problem so clearly into the light that public forces could unite to find a common solution. Researchers from around the world, including Jackels, were invited to Kigali. Leading up to that conference and since that time, Jackels has been on the chemistry fore-front of fighting the "potato taste problem" in coffee.


"Potato taste defect is the hardest problem I've ever worked on," she told me over Mex-Asian fusion tacos at the Athenian restaurant at Pike Street Market.

This is a weighty statement since Jackels is near the end of her university career. (Fortunately, she plans to continue researching after formal retirement.) She has successfully solved daunting problems, tackling fermentation issues with coffee farmers in Nicaragua in the early 2000s and then supporting an initiative for her university to become one of the first fair-trade universities, back when even the students were skeptical! (They finally achieved FT status in 2014.)

I asked Jackels, "what are some of the key learnings about the potato taste defect that we have today?" Here is a summary of what I, as a lay-person, took away. Please consume these bullet points with caution! There are scientific papers published by Jackels and others on these topics.


She shared the direction she sees things going in terms of detection and prevention.
Detection in green coffee: one of her Ph.D. students (Mateus Montenegro) did an experiment with landed green coffee from Rwanda and Burundi. Using gas spectrometry he tested whether IPMP levels were higher in less dense coffee beans (inverse relationship). He found this to be the case for the 1200g (~2.5 lbs) samples he had. Noteworthy is the fact that identification of the potato taste smell was done by a trained  human.


"The human nose is the best tool for detecting PTD," Jackels says. She worked together with coffee companies for awhile to develop an "e-nose" and said it just cannot compete with the sensitivity humans have to the IPMP odor. "Also, hydrospective imaging has been shown to not work as well."

Prevention of PTD: Jackels advises the following as practices that will give the greatest likelihood of reducing PTD incidents in roasted coffee being given to consumers. 100% elimination is still considered unlikely.


1. Soil management with “sweet” (fresh) mulch is key for reducing PTD.
2. Floating cherry, since less dense beans are more likely to be beans damaged by Antestia and therefore containing high levels of IPMP.
3. Hand sort while the beans are wet, it’s easier to see and remove the damaged ones.
4. Eliminate damaged beans at the soak stage, too.

The uncertainty around prevention techniques is what continues to lure Jackels and many other researchers to pursue answers to the problem.
So clearly, there is still a lot to learn, and a lot happening to "reach" a better understanding of how to prevent potato taste defect.

Views not to be missed when at Pike Street Market: 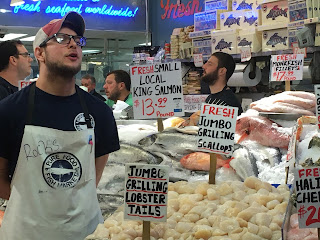 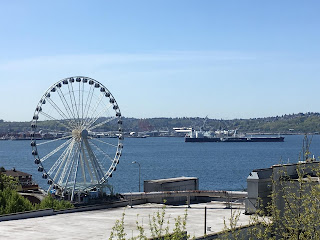 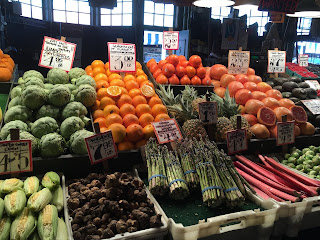 81. "Poverty Coffee" Is Not Attractive to Youth at Origin

April 5, 2018
There is a lot of wringing hands about how to attract youth in the Coffeelands to want to grow coffee. Journalists, politicians, coffee roasters and buyers have become united in their alarm about the advanced age of the "average coffee farmer".

The message is clear. The younger generation is not following their parents and grandparents into the coffee farming business. A recent report  from the International Coffee Organization on the sustainability of coffee in Africa states the problem plainly: "The average age of farmers is over 60 despite the continent being dominated by a huge number of young people. Indeed, the young and educated do not engage in coffee production due to the low returns."
(ICO, ICC-11-4-5, 2015).

In other words, "poverty coffee" (Artisan's choice of words) is not attractive to youth at origin. We can bring children and teenagers into the coffee fields and show them how coffee farming works. We can make it clear that new systems exist to test soils, accurately fertilize trees, rejuvenate trees, test coffee cherries and process coffee with more precision than was done in the past. But  the fact of the matter is, the industry cannot keep the attention of youth on coffee as long as they only see low returns to their investment compared to their other choices.

The coffee industry (of which Artisan is a part) needs to grow up and understand that some aspects of the Lewis "dual-sector" model of economic development are in evidence here. There is a labor transition happening between two sectors, the 'capitalist' sector (including services and manufacturing) and the 'subsistence' sector.  The fundamental assumption of the Lewis model describes what appears to be happening before our eyes: that surplus of unproductive labor (that would happily take a job as a coffee farmer in the past), is moving to 'capitalist' sectors in the capital cities. They are going to work in sectors with high enough productivity per person to be able to pay wages higher than the average a coffee farmer earns.
According to the Lewis model, attracting youth to coffee would mean improving the productivity (revenues earned) per employee in the coffee farming sector. The status quo seems to be to pay "sub $6.00" prices per KG green landed (or < $2.73/lb green landed), which probably means paying subsistence wages on the coffee farm. For example $1.00 per seven hour day. $1.00/day is not scandalous in terms of pure economics. It is an average, market-based wage today in many rural areas. But these rates are not accounting for the impending exit of laborers from the region. Rates today do not include the cost of replacing the ones who get up and grow coffee today. If prices do not increase, the outcome after  the "old guard" has retired, is unknown. According to the Lewis theory, the supply of labor will continue to be in surplus and available at low wages. But one already sees evidence that the surplus can disappear as countries develop. Rural wages have increased in some coffee-growing regions in Central America as labor, especially during  harvest, becomes scarce. The smallholder farmer income (working their own land, not someone else's) also needs to see increases, as opportunities for them and their children in the city become more and more accessible.

Quality coffee is grown with techniques that are more labor intensive, (e.g. pruning, mulching, hand-picking, etc.). So companies with supply chains dependent on high-quality, green Arabica coffee need to realize they are competing with vibrant digital, banking and manufacturing industries for the future. In those industries, youth are seeing young adults with attractive life-styles: phones, cars, a vacation once in awhile. And they're not believing they can get those things with what amounts to $1.00/day returns.

To attract youth who have these choices ahead of them, "coffee or computers?", it does not take a tremendous amount of analysis to figure out which project will help. Investing more in the price paid for green coffee will help. By paying above $6.00/KG for green landed coffee today, (and asking what of that amount is paid to the farmer), roasters can be more confident that they are contributing to a healthy future for the sector. There are similarities in education - paying for early childhood education avoids much higher costs later, and in medicine - paying for wellness visits avoids high-cost emergency treatments down the road.

As an industry, we need to do more than just cover rising labor costs in the coffeelands, begrudgingly and belatedly. We need to  get coffee into the forefront of the crowded "job fair" that young people are looking at today. When youth see that there are returns to investments in high quality coffee, they will be attracted. When the older adults around them see that there are profits to be earned with coffee, they will encourage their offspring to gain knowledge about coffee, not abandon it.